The story of Sofia Sans started with a phone call from Filip Boyadjiev, a colleague of ours and Ani Petrova’s former fellow student at the National Academy of Art Sofia. At the tail end of 2017, Boyadjiev informed us that his studio Fullmasters had been hired to develop a wayfinding system for helping visitors navigate Sofia’s tourist sights and attractions. That year, the Bulgarian capital had reached second place in tourism growth among European cities. The wayfinding system required a feature-rich OpenType family with a large character set including small caps, several figure styles, arrows, numerals in circles, etc. Most importantly, the fonts needed to offer support for Bulgarian Cyrillic, as all text was to be set in both Latin and Cyrillic. 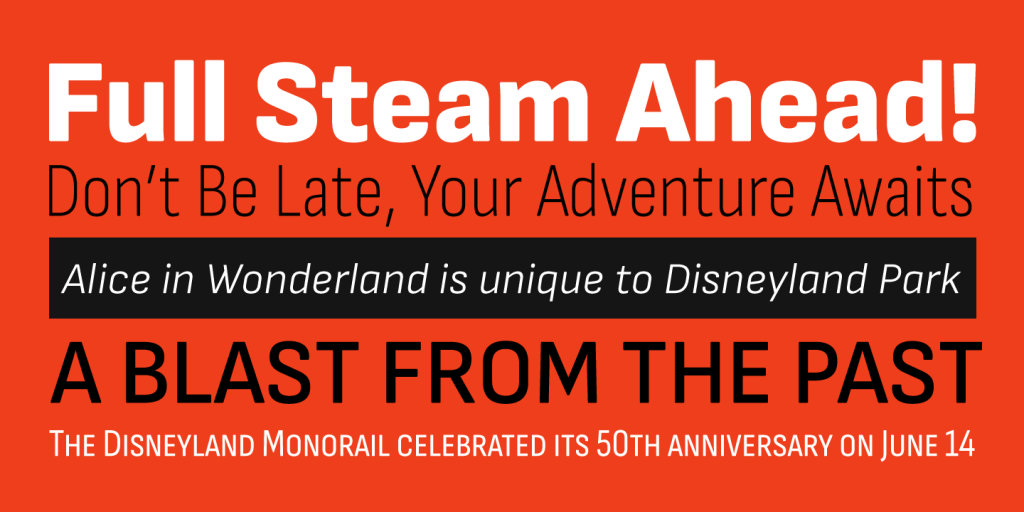 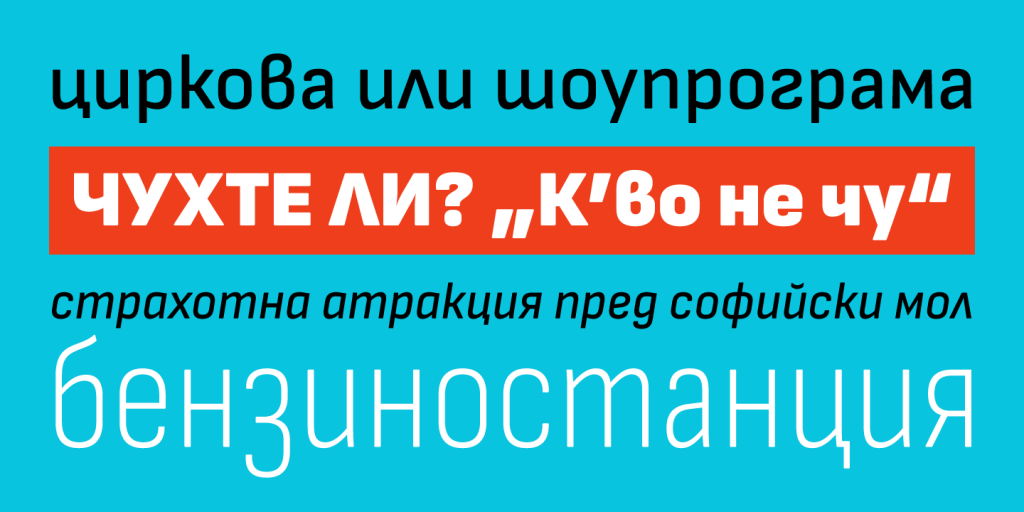 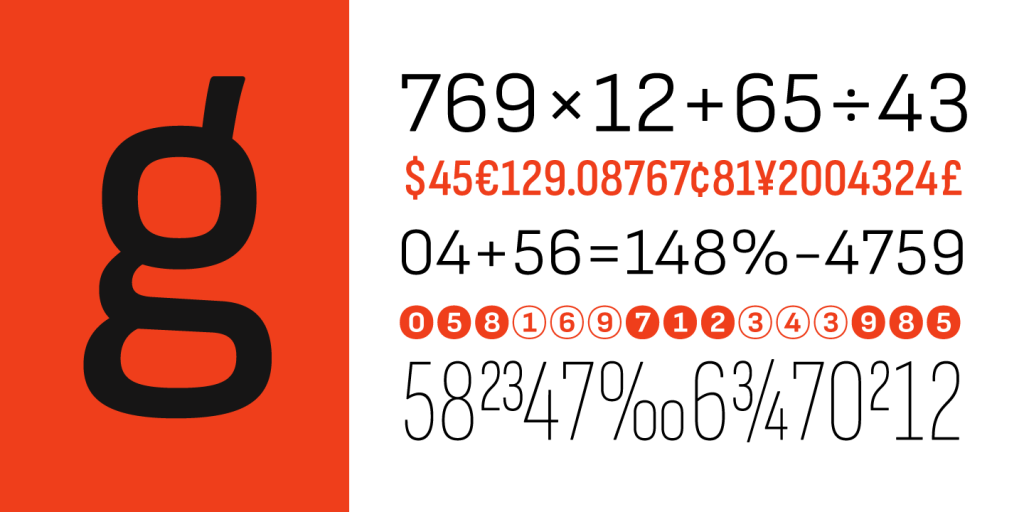 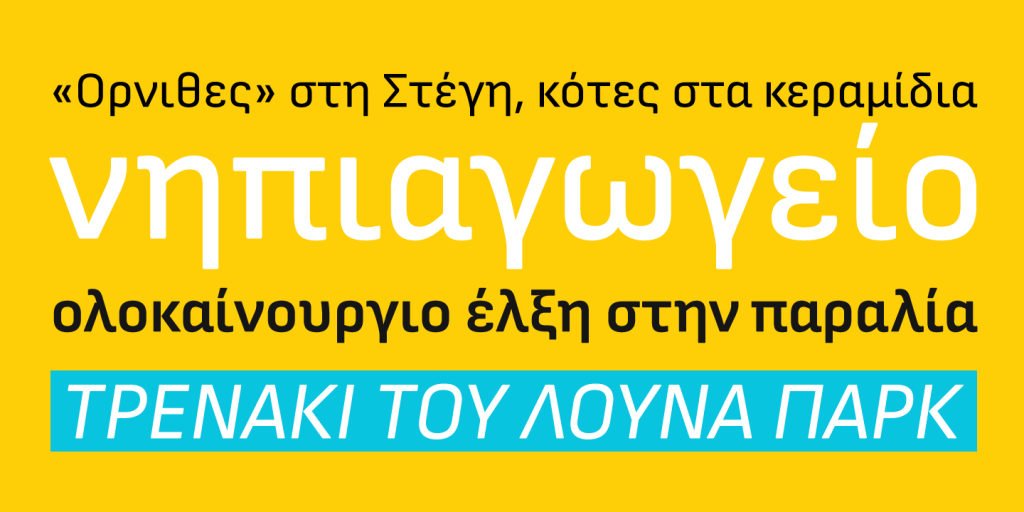 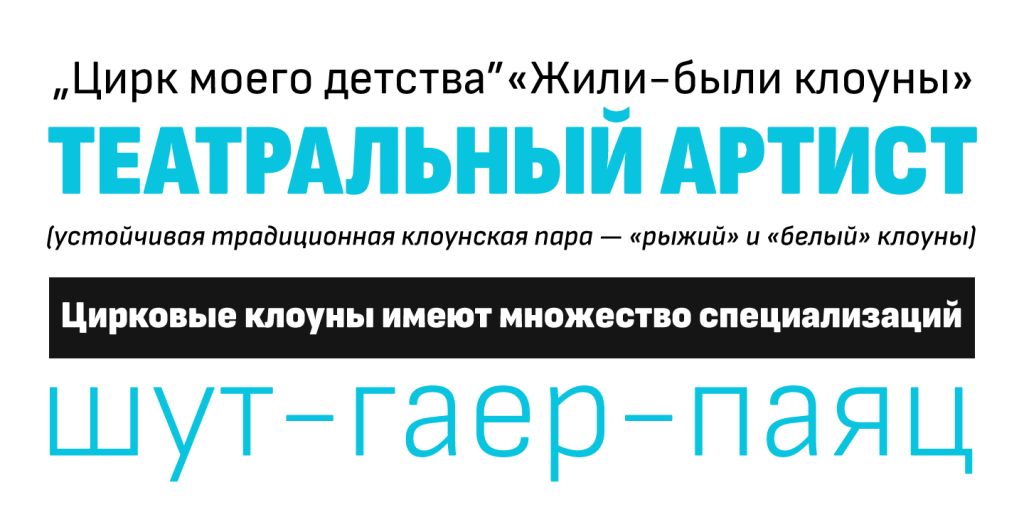 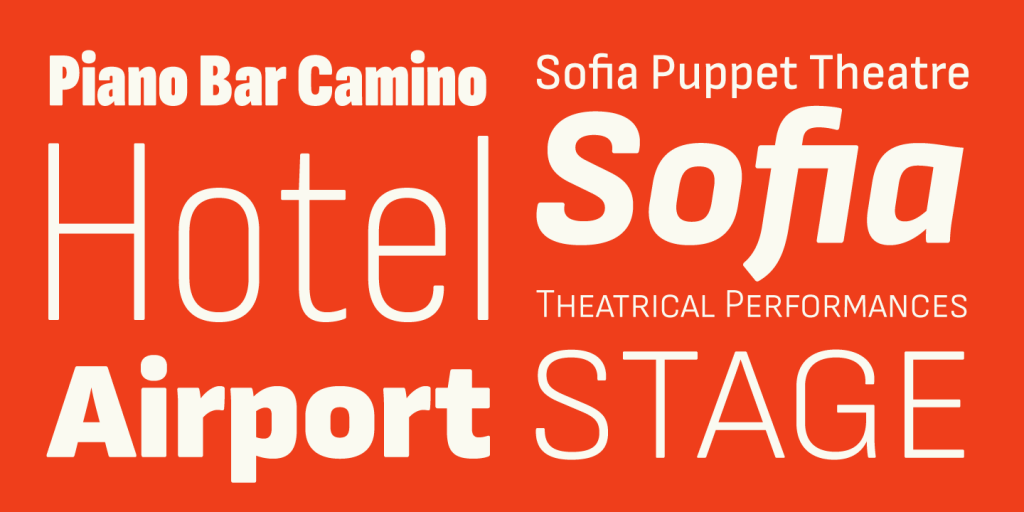 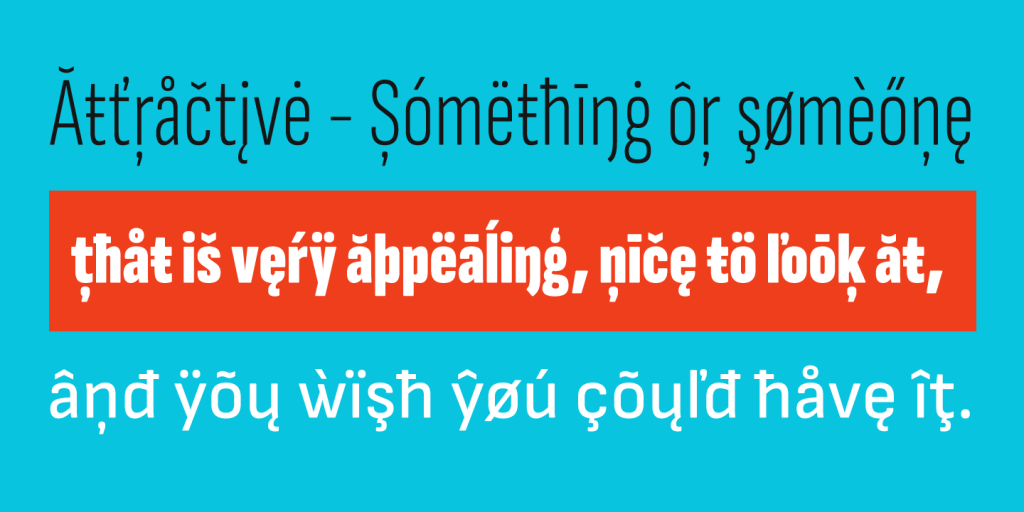 Because of the modest budget and short deadline, creating a new type family from scratch for this purpose was not feasible. Fortunately, we had a viable candidate that we could expand to meet the project’s requirements: Attractive. The story of this humble font began with another phone call and a simple question. Earlier in 2017, my Bulgarian colleague Ani had asked me: “Why don’t we make a free font? A nice one, not a quick and dirty one! And let’s share it with the world.” A tiny seed was planted, but little did we know how big the project eventually would grow.
First, we needed to decide which kind of typeface to create. Going through potential type styles, we settled on a straight-sided sans. The inspiration for our design came from early-twentieth-century so-called technical sans serifs—typefaces with confident letterforms, a pronounced vertical impetus, and tense curves. We aimed to create a universally useful font family. With narrow proportions and a generous x-height, we drew a space-saving workhorse that would work well in very diverse environments: from large to small, for display and immersive reading, on-screen and in print. When looking for a name, we went back to that original question and christened our typeface Attractive. 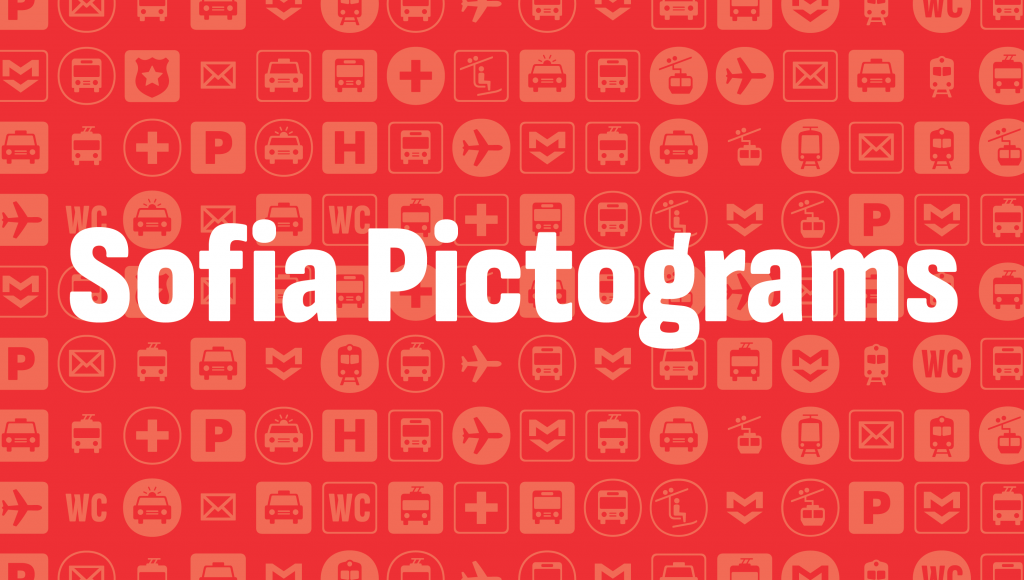 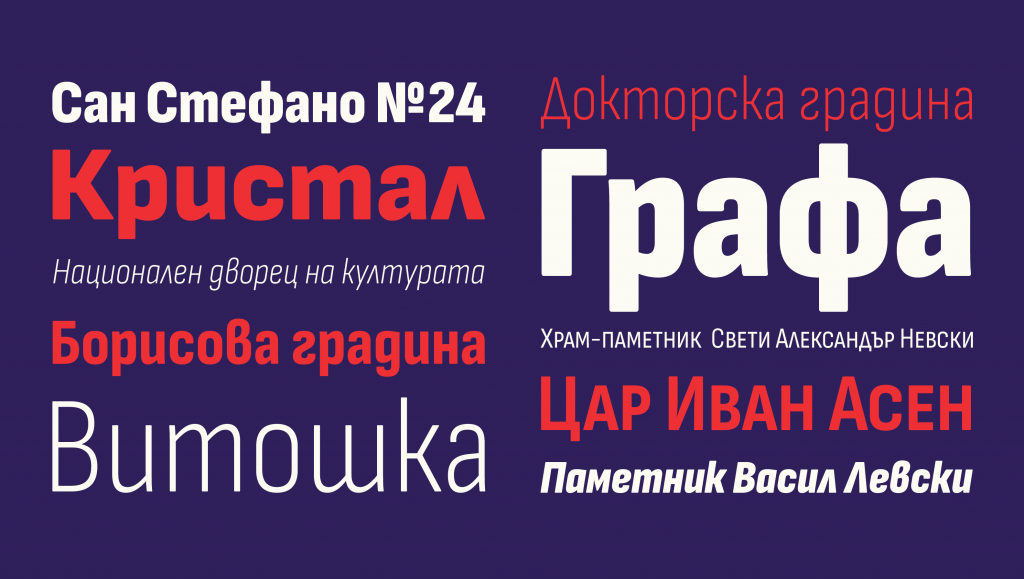 Back to Sofia’s wayfinding system—Attractive only existed in two styles—one single weight in upright and italic—and had a limited character set. Still, it provided an excellent jumping-off point for developing an extensive type family. Fullmasters’ concept consisted of three types of elements: large and small totems containing text, directions, and map information, and signboards when only a minimum of information was necessary. We soon concluded that the typeface needed to have condensed widths too, to accommodate the different sizes of the two totems and the signboards. We also had to take into consideration the varying lengths of the names of streets, squares, parks, buildings, monuments, and other tourist sights featured on the signage. Eventually, we ended up planning a comprehensive type system in four widths with extended language support. It needed to cover Extended Latin as well as the Greek and Cyrillic alphabet because we wanted the fonts to support all three scripts used in the European Union. 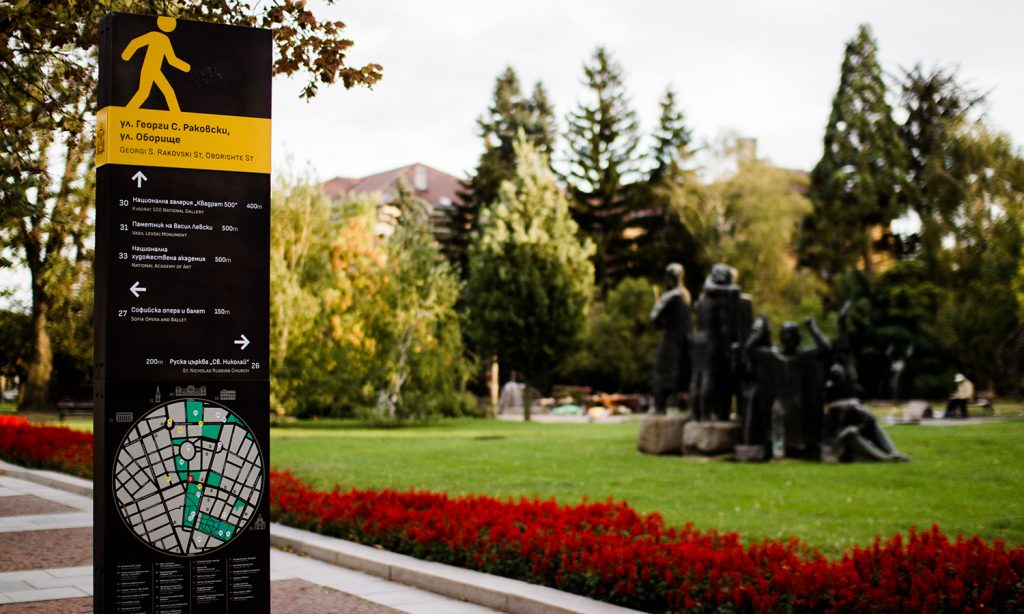 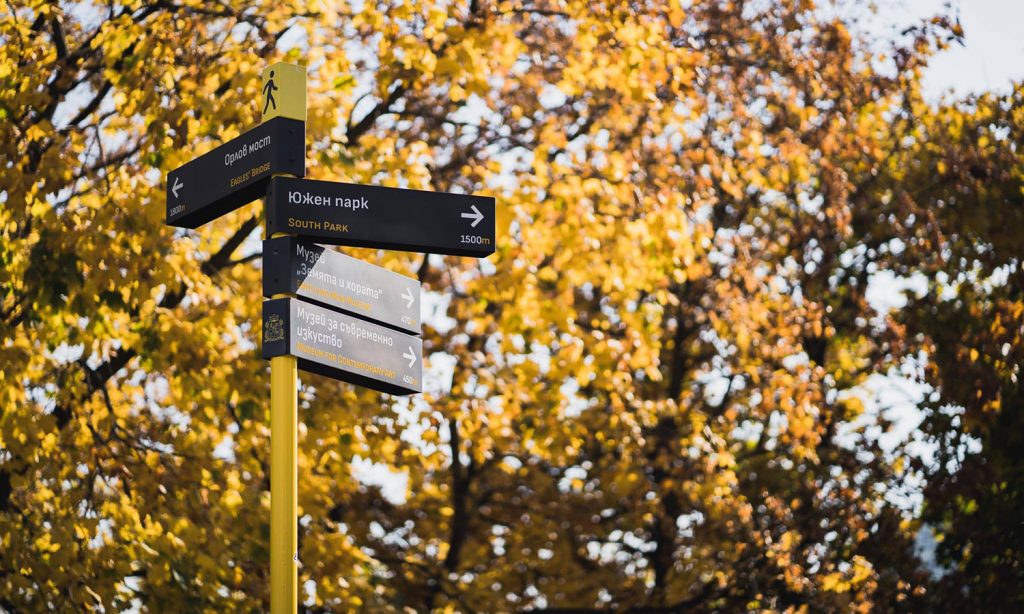 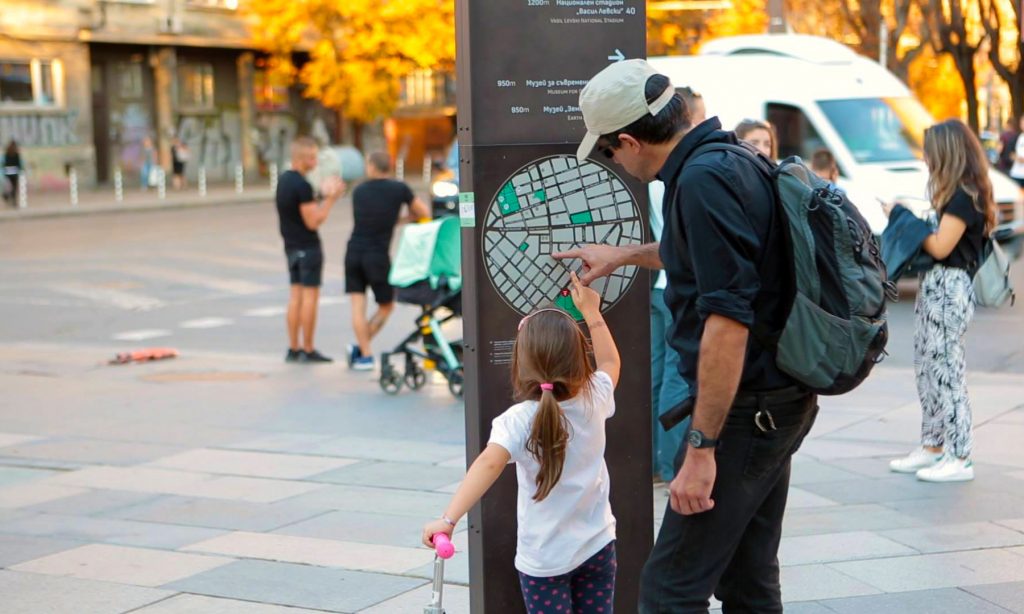 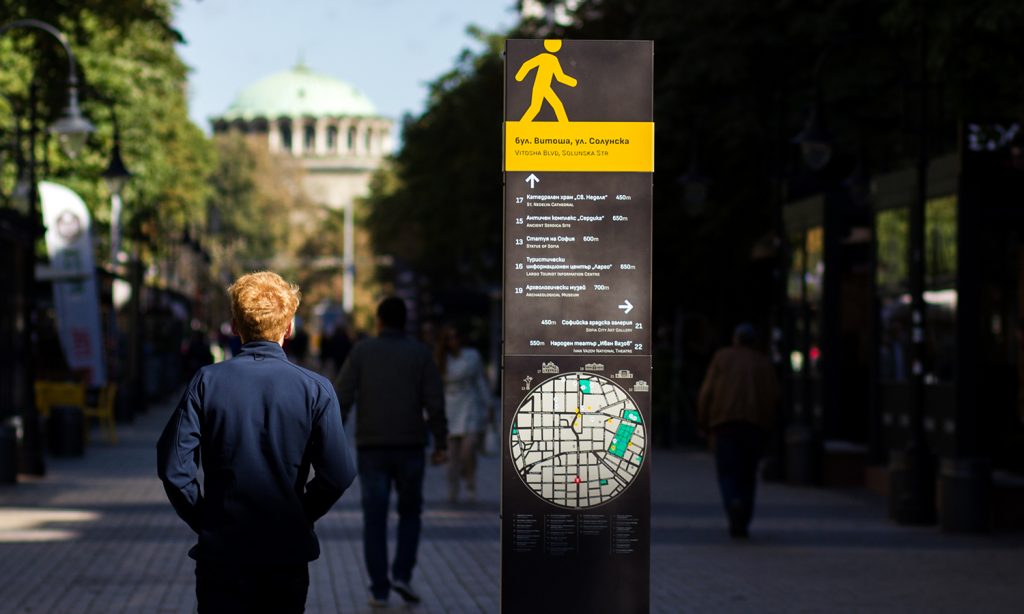 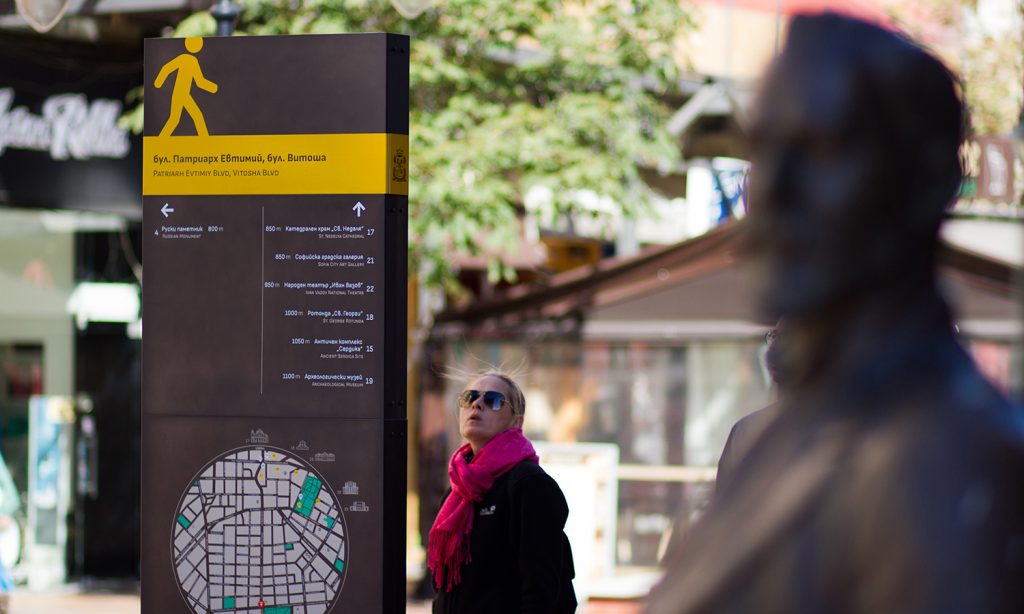 The successful adoption of the typeface for Sofia’s tourist wayfinding system started a snowball effect. The project culminated in Sofia Municipality commissioning the type system under the name Sofia Sans. Zdravko Zdravkov, Chief Architect of Sofia Municipality, Architecture and Urban Planning Division, envisioned Sofia Sans as becoming the de facto official typeface for the Bulgarian capital. This adoption, however, didn’t happen overnight—it was a long and involved process. For the first time in its history, Sofia Municipality considered adopting a typeface for the city on such a large scale. We took it upon ourselves to guide them through all the lesser-known aspects of typography, informing them about type design, font development, and licensing models. The commission initially took into account four to six weights for Sofia Sans. During the process, Sofia Municipality came to the realisation they needed more variants for catering to all the possible environments and applications. Because of the multitude of options, it took a considerable time before the decision-makers finally agreed on what exactly they wanted this modern, performant type system to be. Once he saw Sofia Sans was a good start for the city, Zdravkov suggested adopting the typeface for the entire municipality, a recommendation supported by Sofia’s mayor Jordanka Fandakowa. 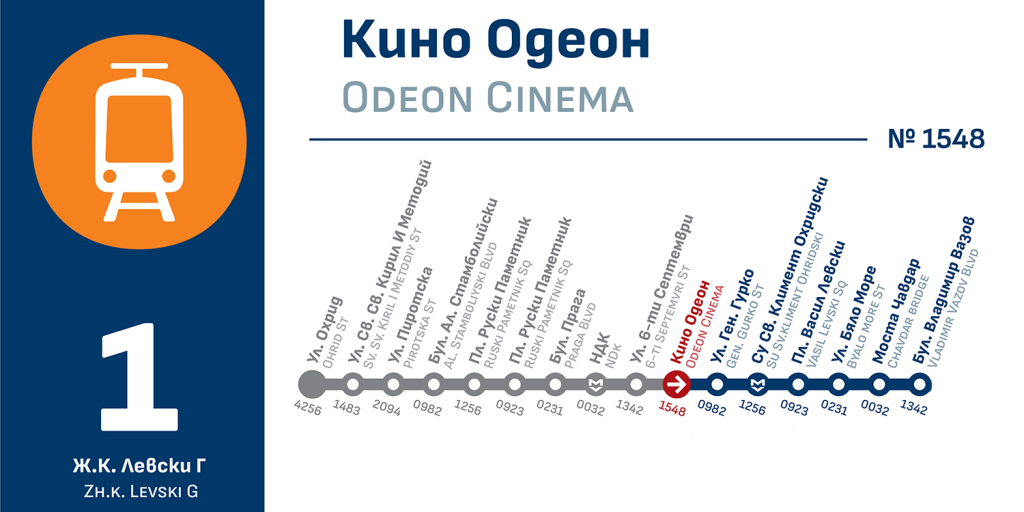 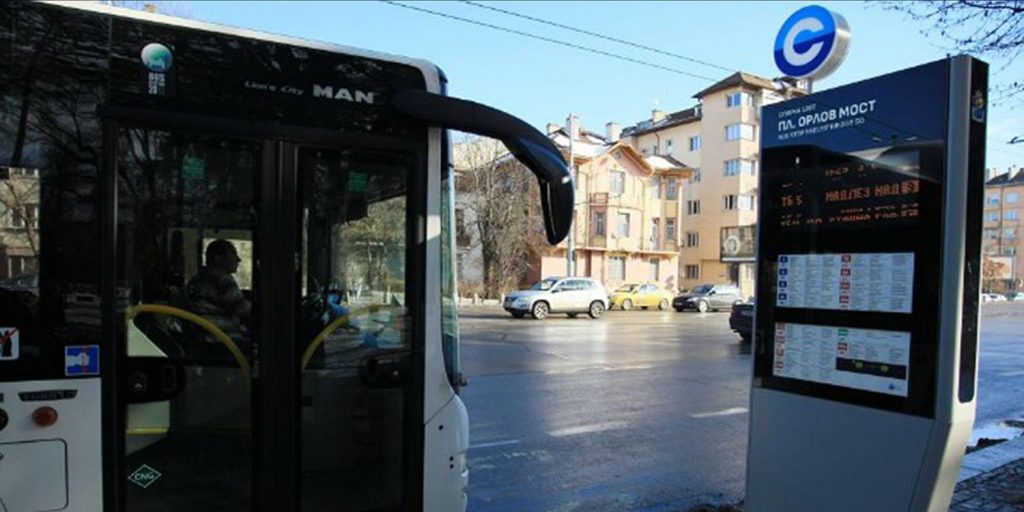 After deploying Sofia Sans for the tourist wayfinding system, Fullmasters used it in their new signage for the Urban Mobility Centre, Sofia’s public transport system. Sofia Sans was integrated into a unified design system that served all nine different types of signs. The new typeface made it possible to incorporate more information than in the previous incarnation and improve the legibility of those signs. The overhaul made the new signage more useful for residents and specifically for tourists thanks to the introduction of English translations next to the original Bulgarian text. 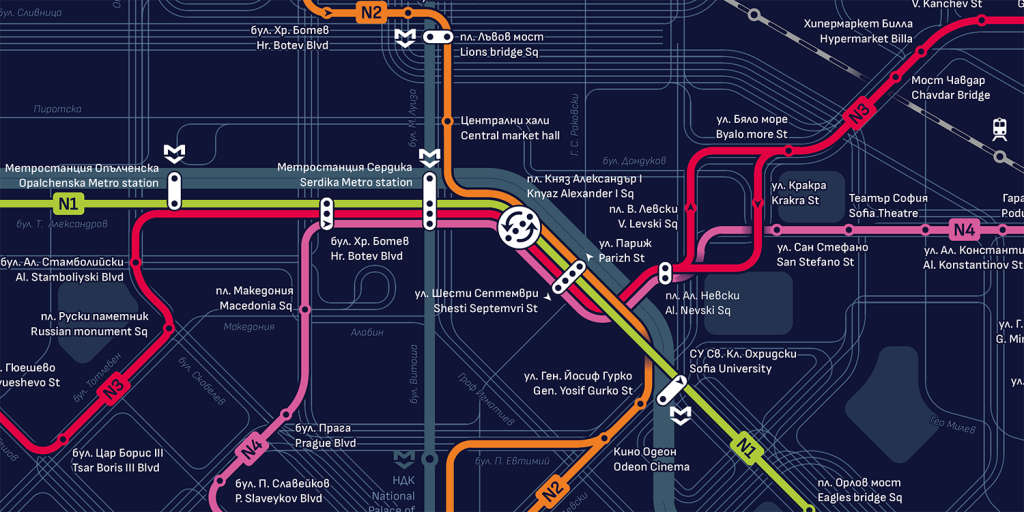 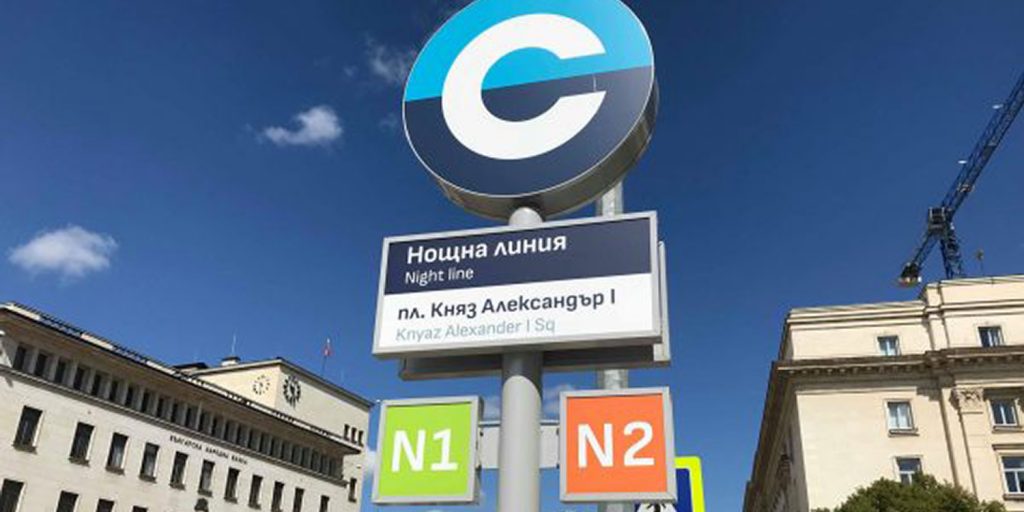 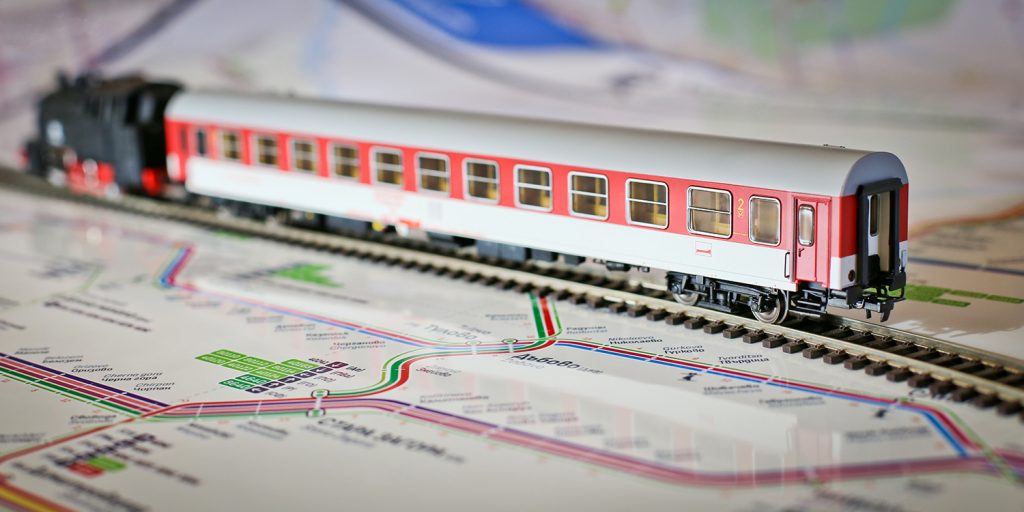 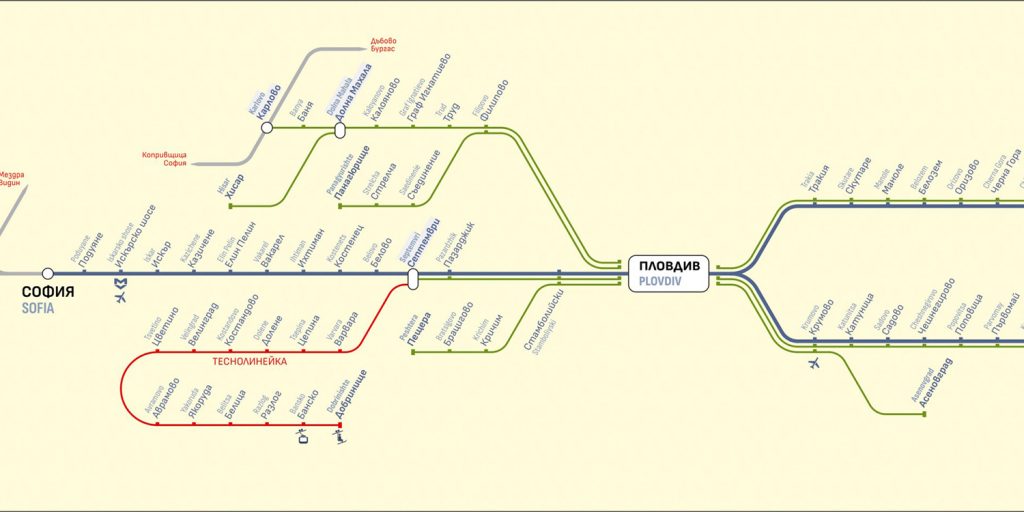 Putting Sofia Sans through its paces in such complex design environments with high information density proved how versatile, reliable, and robust the typeface was. When the Bulgarian State Railways commissioned True North to create the national railway maps, Stoianov decided that the font family was the perfect option for this project as well. After typographically branding its capital, Sofia Sans was ready to hop on the train and go national in Bulgaria.

The next person to contact us was Ljubo Georgiev, Team Lead for Vision for Sofia. This group of professionals does long-term development strategy for Sofia and the region. An initiative of the City Council of Sofia, the team aims to define a shared concept about the city’s future and the steps necessary to achieve this. It recognised Sofia Sans’ value and deployed it as Vision for Sofia’s corporate typeface. However, Georgiev explained they required a better technological structure, one similar to the one used by Google Fonts. This request led us to contact Dave Crossland, Google Fonts Program Manager, and we started negotiating the release of Sofia Sans on Google Fonts with a SIL Open Font License. (The fonts are already published on GitHub with an OFL license.) Because of the large number of weights and widths, we asked our friends at Alphabet Type to create Variable Font versions of Sofia Sans. All 104 weights and widths—and any imaginable intermediary styles—will be available as two compact VF fonts on Google Fonts. An additional advantage of the Variable Font format is that it dramatically reduces the download size for the font family. The small size will have web pages set in Sofia Sans render more efficiently and much faster.

Sofia Sans’ relevance transcends the fact that it has been adopted by so many official institutions in Sofia and beyond. It also is part of our continuing push to improve and promote the Bulgarian style of the Cyrillic alphabet. Sofia Sans is the first extensive type system to have Bulgarian in the default Cyrillic positions, and the second major step in our efforts to increase the popularity of the Bulgarian variant of Cyrillic. The first one was the creation of a technical standard for Monotype. We specified which Bulgarian glyphs should be included in serif and sans serif typefaces, determined how OpenType features should behave when typing Bulgarian, and designed the Bulgarian glyphs for many of Monotype’s most popular typefaces.

On a side note, we are not happy with the existing terminology. Calling the two styles Russian Cyrillic and Bulgarian Cyrillic amounts to a political act and is, semantically speaking, incorrect. During our discussions in early 2016, Adam Twardoch suggested different, more appropriate names: square and rounded Cyrillic; the latter term also designates Glagolitic. We hope these new names will become more widely used and help to depoliticise the issue. 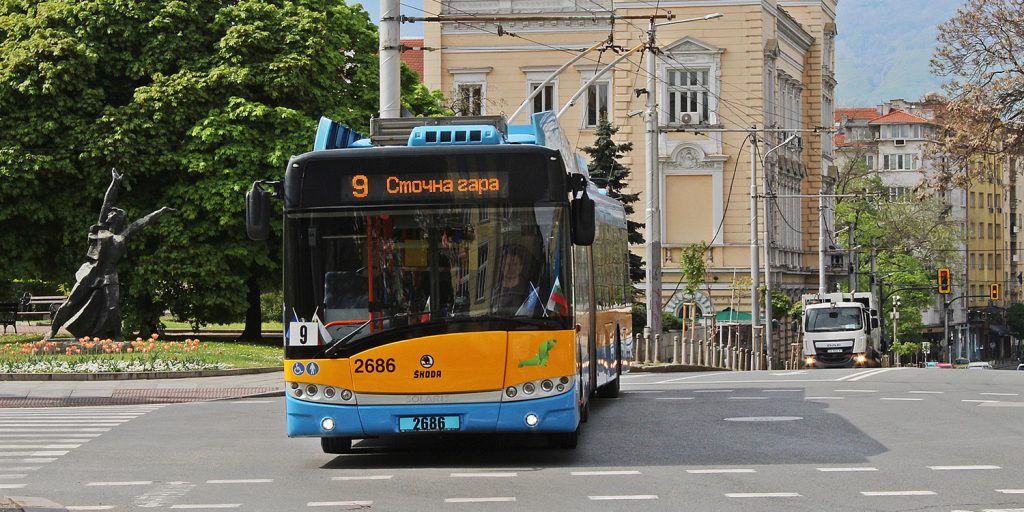 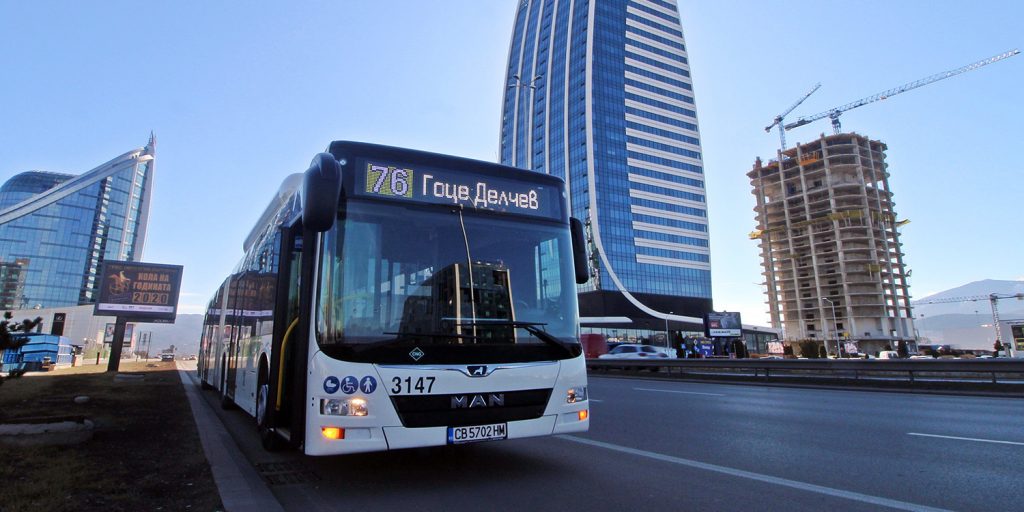 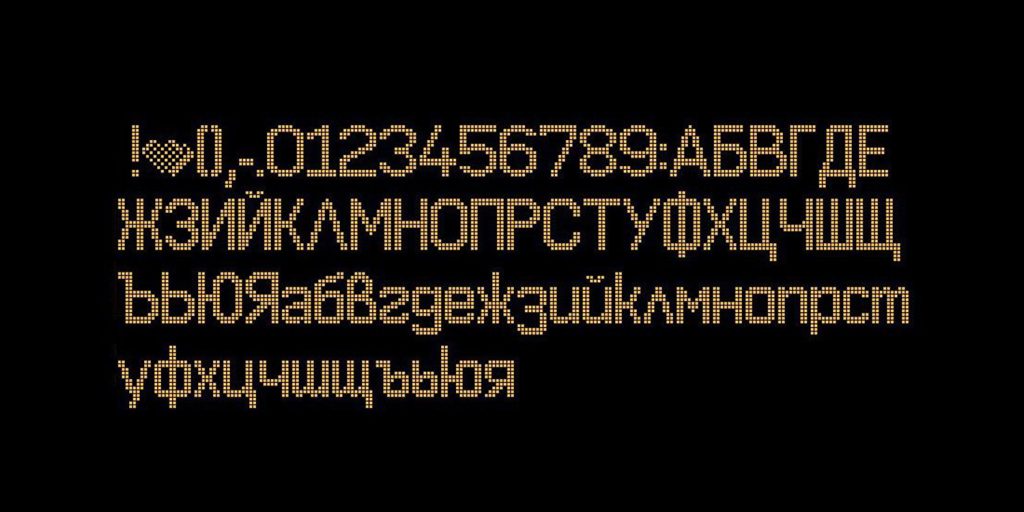 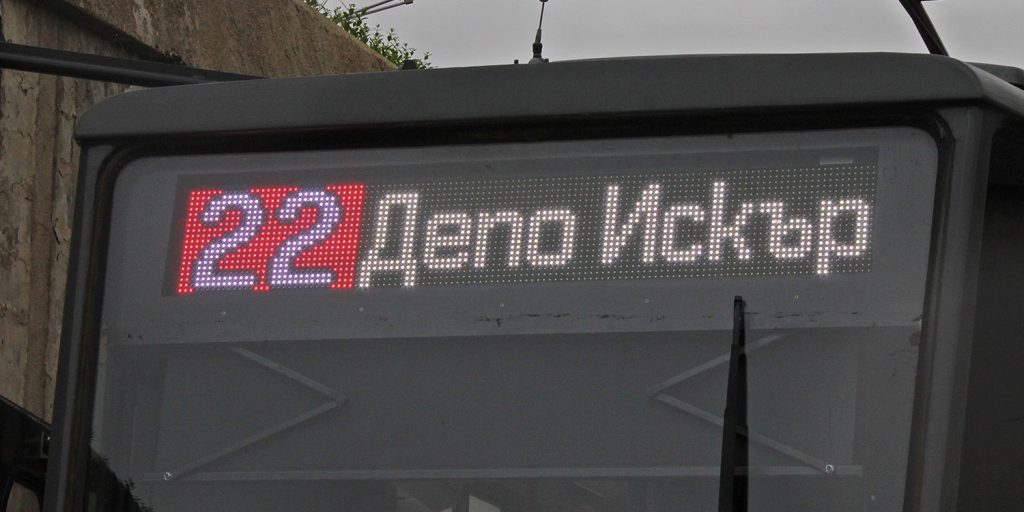 Sofia Sans’ growth shows no signs of abating yet. Only recently, Mario Evstatiev let us know that he is working on LED signs for buses, trolleybuses, and trams. Reworking Sofia Sans as a very low-resolution font—a 19-pixel-high bitmap font in FNT format—is an exciting challenge, one we are happy to sink our teeth in. Meanwhile, Sofia Municipality continues its adoption of Sofia Sans, implementing it in all city documentation and on the city’s online platforms. And there are even tentative talks for bringing the typeface to broadcast television.

You can get Sofia Sans here! To be continued.